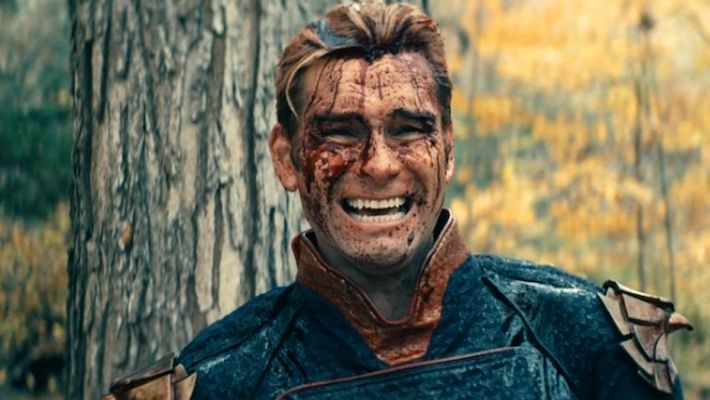 With The Boys scoring an Emmy nomination for Outstanding Special Visual Effects In A Season Or A Movie thanks to its explosive second season, VFX Supervisor Stephan Fleet has opened up about what it’s like bringing exploding whales, a giant elongating “Love Sausage,” and freaky superhero sex to life.

While talking to The Wrap, Fleet revealed that everything traces back to Aristotle’s Poetics, even when you’re trying to figure out the logistic of making two characters like Antony Starr’s Homelander and Aya Cash’s Stormfront have violent mid-air coitus. Although, apparently, that was nowhere near as difficult as the scene where Homelander had to seduce himself:

“If you go back to Greek mythology, there’s a lot of weird sex stuff so it was fun,” says Fleet, noting that a lot of tricky planning went into making these sequence work. “Those are two of my other favorite scenes, but in television you’re always thinking about time and precision and the Homelander doppelganger character morphing is one of the hardest things I’ve had to tackle on the show, it’s very difficult to make it look real. We did a couple of interesting techniques where we overlapped the shadow from him blocking the light onto his face, and we were able to have them touch each other by splitting color and not actually split the screen. But ultimately, an incredibly rewarding day because Anthony Starr is amazing.”

With The Boys Season 3 currently in production, it’s hard to imagine how the show can top some of the dark, raunchy scenes from Season 2, but according to Fleet, that’s exactly the plan. Season 3 will deliver an even “bigger” experience while staying true to the show’s focus on character even as aquatic mammals are exploding and 12-foot-long penises are doing their thing.

Source: ‘The Boys’ Emmy-Nominated VFX Supervisor Gets Mythological About Filming The ‘Weird Sex Stuff’ In Season 2

How to Read a Candlestick Chart

Buffy vs. Deadpool: Who makes it on the ultimate action movie squad?