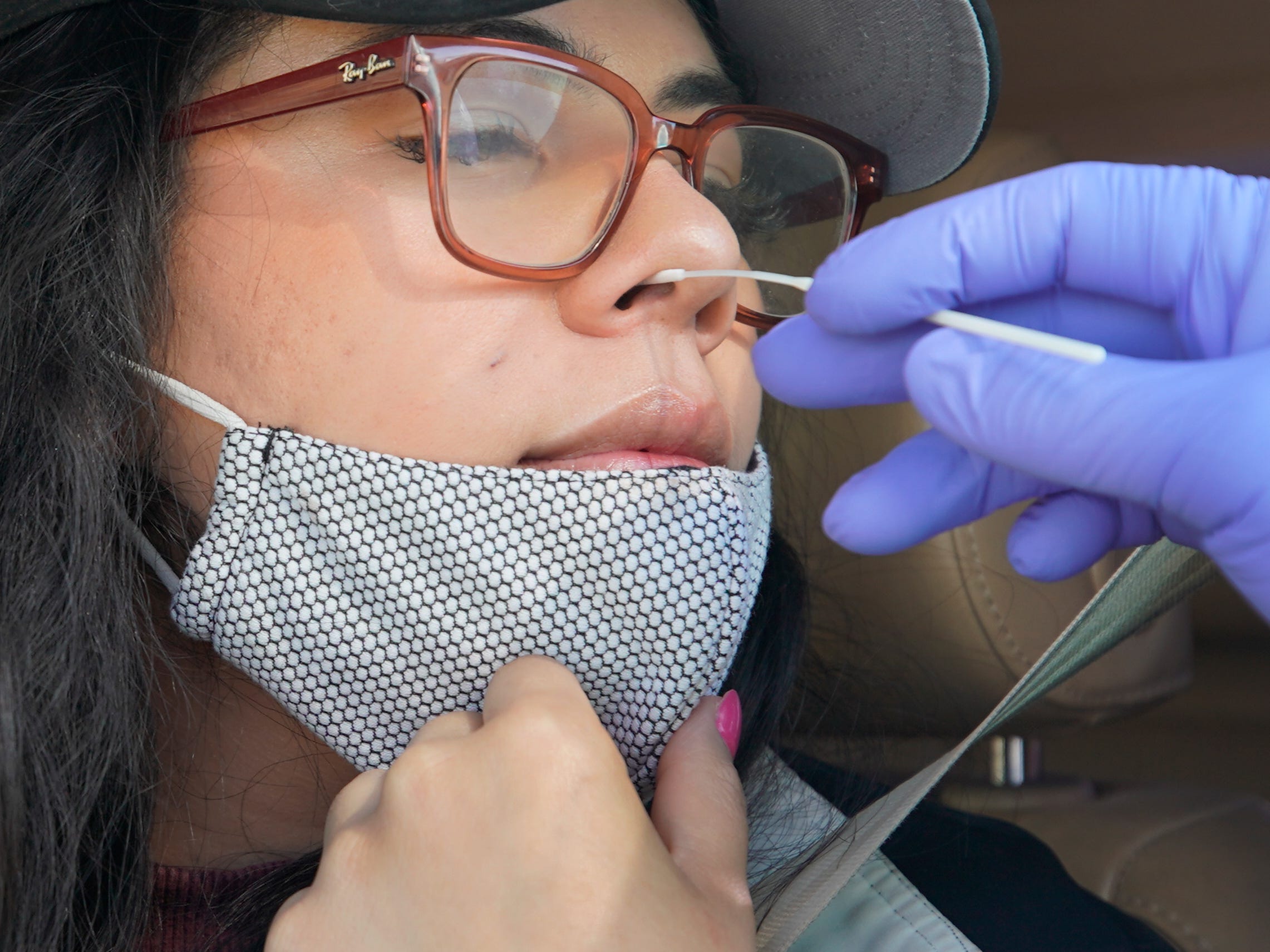 A woman gets a COVID-19 swab test at the Utah County Health Department in Salt Lake City on November 20, 2020.

Companies that manufacture COVID-19 tests are working to produce new tests amid increased demand, Reuters reported.
Demand for tests dipped earlier this year when cases fell with the introduction of vaccines but has once again spiked with the Delta variant.
One manufacturer in June ordered employees to destroy testing kits and laid off employees, The New York Times reported.
See more stories on Insider's business page.

Companies that manufacture COVID-19 testing kits are working to ramp up production as demand for tests increases as students across the US head back to schools.

Abbott Laboratories, Becton Dickinson and Co., and Quidel Corp. had scaled back their operations to produce COVID-19 tests in recent months as demand for the kits fell, according to a report from Reuters.

Abbott in June and July ordered employees at a facility in Maine to dismantle and throw away parts of testing kits they had created due to a decrease in the demand for tests across the US, The New York Times reported August 20. The dip in demand came as vaccines rolled out and cases of the coronavirus dipped dramatically in the US.

Then, the company laid off the workers hired to make the testing kits, according to the report.

“The numbers are going down,” an Abbot site manager told the 2,000 workers the company laid off at a manufacturing facility in Illinois, according to the Times report. “This is all about money.”

But demand for the rapid antigen tests has once again increased amid the spread of the more transmissible Delta variant, which has fueled a new surge of cases across the US at the same time companies call workers back to offices and students and staff head back to schools and college campuses for the start of the new academic year.

“We're hiring people and turning on parts of our manufacturing network that were idled or slowed when guidance changed and demand plunged,” a spokesperson for Abbott told Reuters in a statement.

A spokesperson for Becton Dickinson told Reuters that supply was currently tight.

“With the rise of cases from the Delta variant… there is currently some tightness in supply as manufacturers ramp back up,” the spokesperson told the outlet.

CVS on Friday announced it would limit the number of rapid tests that individuals could purchase from its stores at one time. Customers were previously allowed to purchase an unlimited number of tests, but are now limited to purchasing six rapid testing kits at a time, as Insider previously reported.

As Insider noted, at-home rapid tests have become a popular way to test for the disease among people looking for quick results.

“Abbott has continuously been manufacturing tests, and we have been scaling up manufacturing as we saw demand increase when Delta became the dominant strain and new CDC guidance called for a re-prioritization of testing,” an Abbott spokesperson previously told Insider.

The demand for COVID-19 tests has increased from 250,000 tests per day at the beginning of July to about 1.5 million tests a day in the middle of August, an increase of nearly 600%, according to federal data reported by Reuters.

As the outlet noted, demand for tests is likely to further increase as more state governments and private employers issue vaccine mandates that require unvaccinated employees to undergo regular testing for the disease. President Joe Biden in July announced all federal employees must be vaccinated against the disease or face regular testing.

Companies like Walmart and major airlines, like United and Frontier, have announced various vaccine mandates. The mandates vary, with some allowing employees to opt-out if they agree to regular testing.

Adoption of Crypto by South American Countries and Implications for Gambling

US destroys CIA outpost outside Kabul airport to keep sensitive information away from Taliban: report