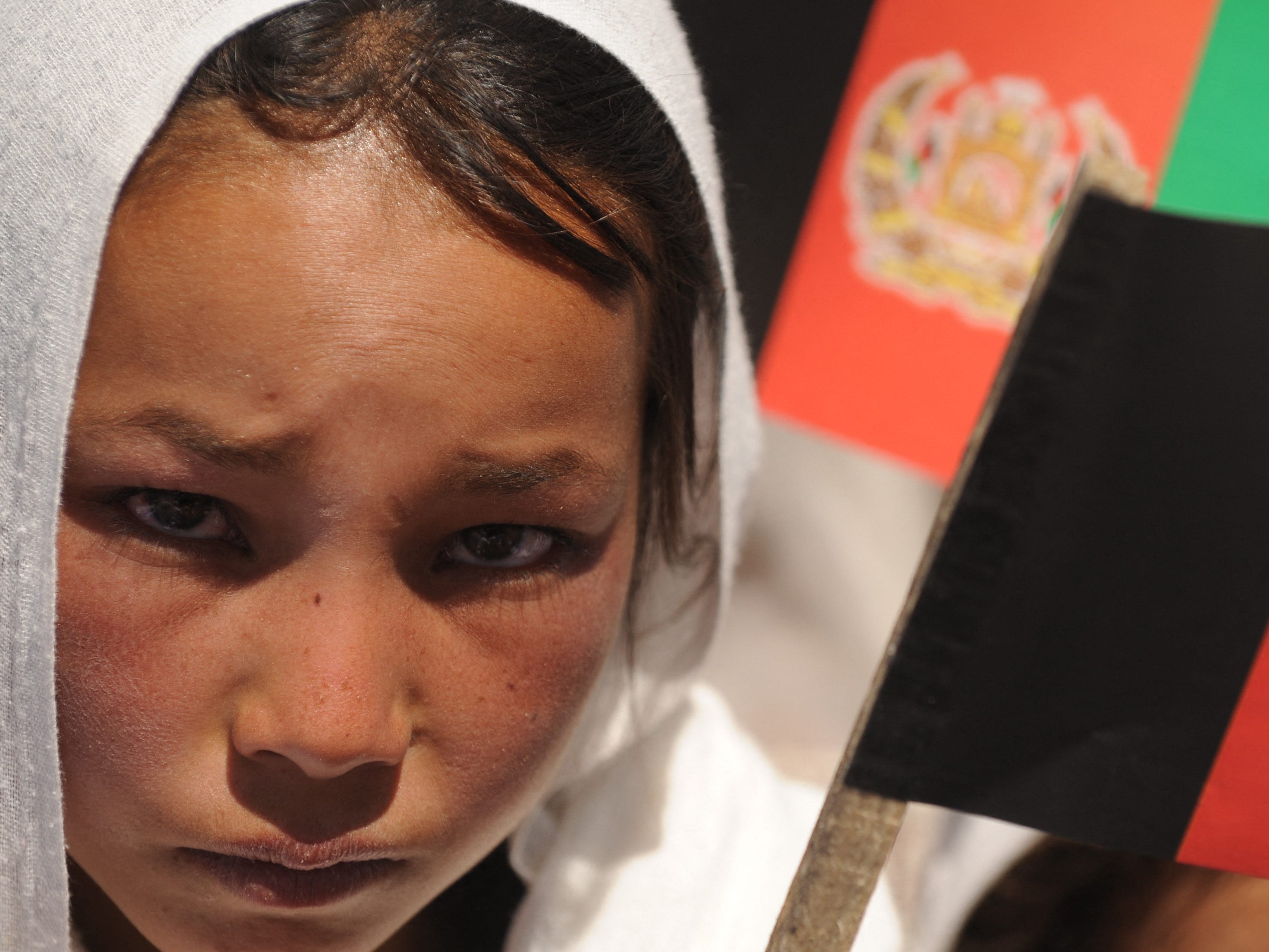 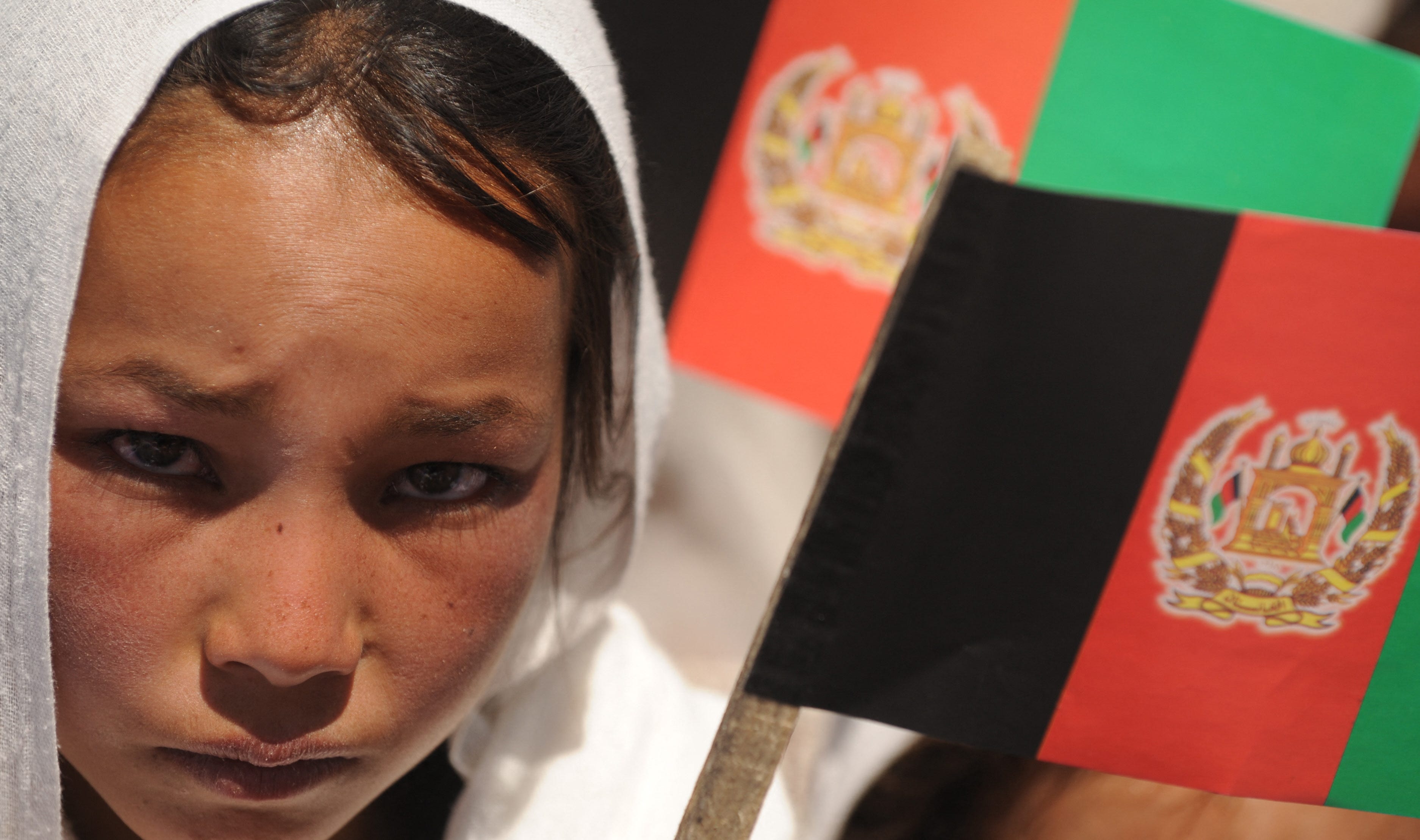 An Afghan ethnic Hazara girl holds a national flag at an event in 2009.

The Hazaras are a long-persecuted ethnic minority in Afghanistan.
During the Taliban's first rule, thousands of Hazaras were massacred because of their ethnicity and Shia faith.
Hazaras told Insider their community is living in fear of attacks from the Taliban.
See more stories on Insider's business page.

“I am scared of what will happen to me,” Ahmad* told Insider on a crackly phone line from the city of Herat in Afghanistan.

“Since the Taliban came to power, my life has completely changed. I'm scared to leave the house. I have no freedom.”

Ahmad, 35, is a member of the long-persecuted Hazara ethnic minority group.

Hazaras are the third-largest ethnic minority in Afghanistan. Estimates suggest that the Hazaras – between six to seven million-strong- could make up between 20%-30% of Afghanistan's population, although there has never been an official census.

Most Hazaras are from the Shia sect of Islam, making them a minority in predominantly Sunni Afghanistan.

Sunni extremists, like the Taliban and ISIS, have long persecuted the Shia minority. They consider them heretics for their divergent views on the true succession of Muslim leaders following the death of Prophet Muhammad.

The Hazara's Shia faith, coupled with their distinctive central Asian features, have made them targets in Afghanistan, where they have experienced violent attacks and discrimination.

During the Taliban's first rule in the 1990s, the Sunni Islamist group systematically massacred thousands of Hazaras.

Now that the Taliban have retaken control of the country, Hazaras in Afghanistan live in fear.

“People are being killed, the Taliban are going inside Hazara people's homes,” Ahmad said. “Unfortunately, this is the reality of the Hazara community in Afghanistan right now.”

When the Taliban came to power, they promised a “general amnesty” for all Afghan citizens and vowed not to target women and minorities.

However, the reality on the ground appears to be very different.

The group also tore down the statue of Hazara leader Abdul Ali Mazari in Bamiyan, who was murdered by the Taliban in 1995.

Ahmad told Insider that in Herat, Taliban fighters have been going door to door in Hazara areas to find people who worked for the previous government or international forces.

“Unfortunately, these people don't have access to the internet, they can't make a viral video, so they are not able to raise their voice.”

Ahmad has several degrees from English universities and is afraid that they will assume he worked with foreign forces if the Taliban finds his paperwork.

“If they find my documents, they definitely will kill me,” he said. “I am now trying to burn my documents, all my qualifications that I spent my life working for.”

Ahmad said the last time he left the house, he was searched and harassed by a Taliban fighter for not having a beard, despite explaining he could not grow one.

While speaking to Insider on the phone, the line frequently breaks up and disconnects.

“This connection on the phone is bad, but I am not even able to go outside into my yard to talk to you because the Taliban might be informed that I have been heard speaking English, that I am acting suspicious,” Ahmad said.

A lifetime of persecution 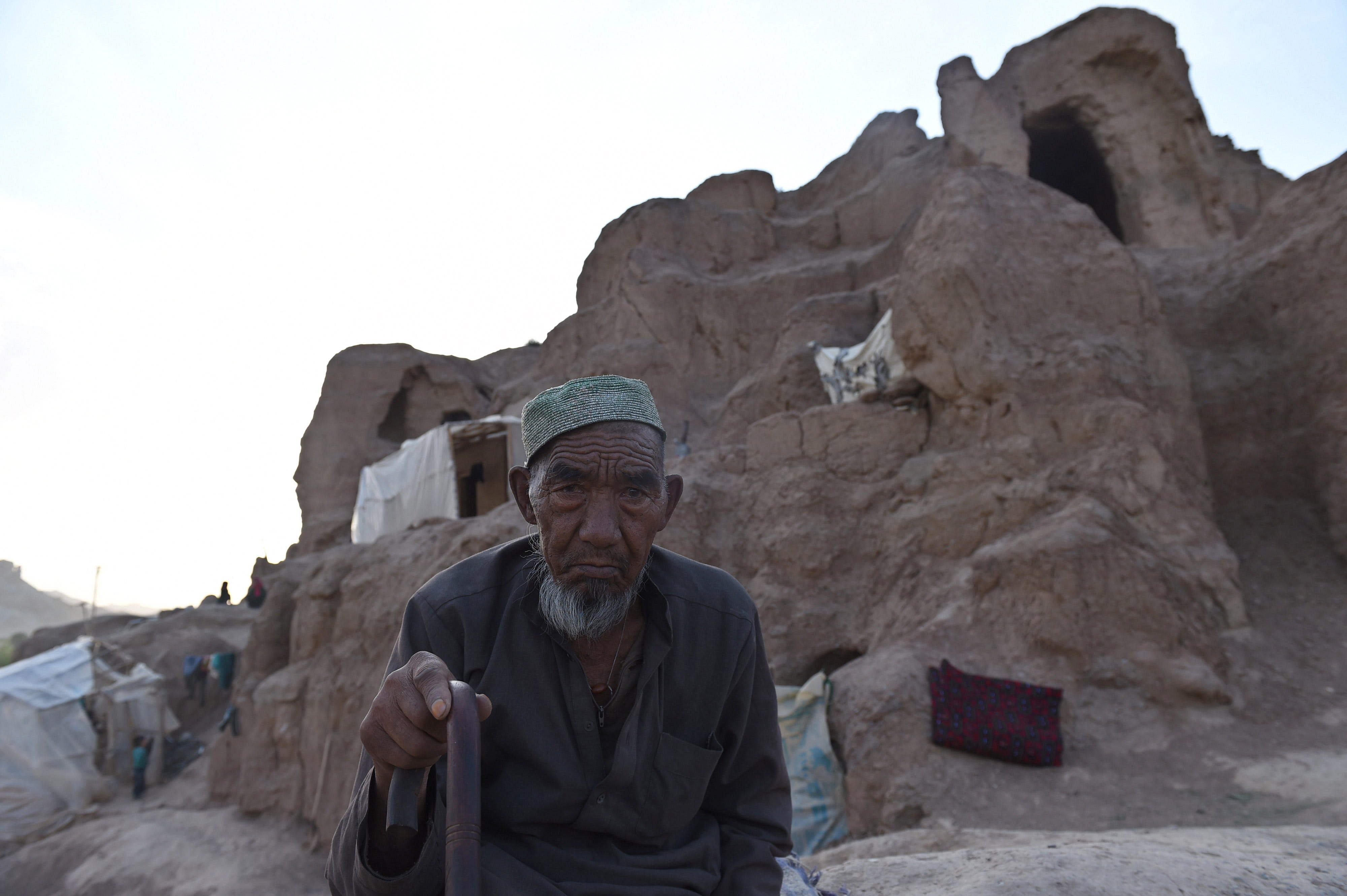 A Hazara Afghan man sits on the top of his cave in the old city of Bamiyan on June 19, 2015

Because of their ethnic and religious identity, the Hazaras, believed to be descended from Genghis Khan, who invaded Afghanistan in the 13th century, have long been persecuted in Afghanistan.

In the late 1800s, King Abdur Rahman Khan ordered the massacre of Shia Muslims, which led to thousands of Hazaras being killed. Many who weren't killed were captured and sold as slaves.

Over the next century, Hazaras have continued to be persecuted and marginalized in Afghan society.

Their central Asian appearance – light skin color, round faces, and particularly their distinctive eye shape – have long been the targets of racist slurs.

“People are killing each other.My heart feels like it is being ripped apart.Instead of human,They call me Hazara, Chashm Badami,”Almond Eyes,” they shout at me!”

A verse from the poem 'Amond Eyes' by Zahra H.

The region of Hazarajat, where the ethnic group primarily lives, was neglected by the government and historically had poor infrastructure, schools, and hospitals.

Few Hazaras could attend university or hold high-level jobs, and often lived in poverty or worked as servants or laborers.

But when the last Taliban regime was overthrown in 2001 and a democratic government replaced, the Hazaras thrived.

They participated wholeheartedly in Afghanistan's society, excelling in many fields and becoming champions of education and democracy.

“It became much better after the United States and NATO forces came to Afghanistan,” Saleem Javed, an ethnic Hazara who now lives in Sweden, told Insider.

“Hazaras got jobs in offices, and they went to universities, but the systematic persecution continued. No Hazaras were given high ranking jobs, and many were prevented from getting an education.”

Because of the high rate of Hazaras gaining admission to the country's best universities, the government introduced a quota system where limited places would be allocated to each region, Javed said.

This led to fewer Hazaras gaining admission, despite getting high marks.

Hazaras also continued to be attacked. Schools, mosques, and protests were targeted. Some of the violence was attributed to the Taliban, some claimed by ISIS and its affiliates.

In May, over 80 mostly Hazara school girls were killed in a multi-pronged bomb attack on a school in a Shia district of Kabul. ISIS-K were blamed.

'Fleeing will be dangerous, but staying in the village is even more so' 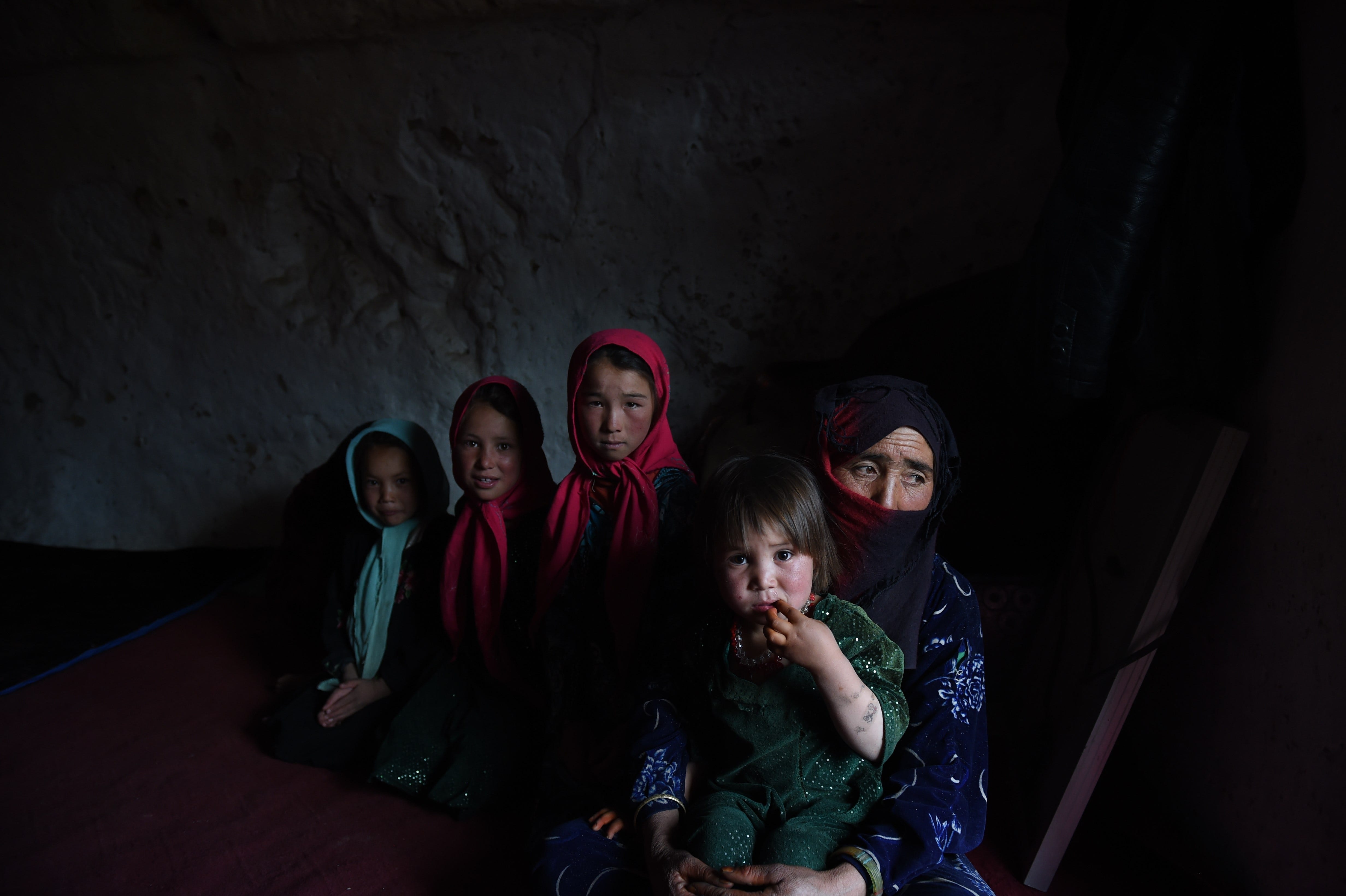 A Hazara Afghan woman sits with her children inside their cave in the old city of Bamiyan, on June 19, 2015.

Sayed*, 26, told Insider he fled Afghanistan in 2016 because of the “systematic, organized persecution, and violence against Hazara people.”

“We have been trying our best to contribute to the government, to society, to Afghanistan. We have proved that we can contribute and work hard in the past 20 years,” he said.

Although he now lives as an illegal refugee in Thailand and cannot work or study, he feels it is a better fate than the prospects he had in his home country.

Sayed has been desperately trying to evacuate his three young siblings who are still in Afghanistan and living without a guardian ever since their father passed away in 2018.

“They are terrified,” he said. “They're under the age of 15. They are all alone. Fleeing will be dangerous, but staying in the village is even more so.”

In the last few weeks, harrowing images have emerged of Afghan citizens desperately scrambling to flee the country at Kabul airport.

One video circulated on social media showed a Hazara man with blood running down his face, saying he had been attacked while trying to get to Kabul airport.

Saleem Javed told Insider he was aware of many instances of the Taliban “ethnic profiling” Hazaras and preventing them from entering the airport.

Many Hazaras who worked for the previous government and international organizations have also burned their documents out of fear of reprisal from the Taliban, Javed said.

Now, many are trapped and unable to leave the country without their travel documents.

Although the Taliban have already carried out some targeting killings of Hazara people and continue to harass and intimidate them, they have so far refrained from committing massacres on the scale they once did.

“There is a huge fear that once the international forces leave and the focus of the international media goes away from Afghanistan, the Taliban are going to start doing what they were doing in the 1990s,” Saleem Javed said.

Javed said another fear is that an emboldened ISIS or al-Qaeda might attack the minority group with impunity.

“Even if the Taliban themselves are not going to kill them, what is the guarantee that the Taliban will protect them?” he said.

“We are not safe in Afghanistan,” Ahmad said. “The Taliban want to eliminate the Hazaras and all of our culture, our history, our everything. They're trying to eliminate all proof of us.”

After speaking to Insider on the phone for some, Ahmad said he needed to hang up.

“My neighbors are looking at me through the window, they are wondering why I'm speaking English. It's not safe for me to talk.”

(* The names of some of the Hazara people that Insider spoke to have been changed to protect their identities,)

US destroys CIA outpost outside Kabul airport to keep sensitive information away from Taliban: report