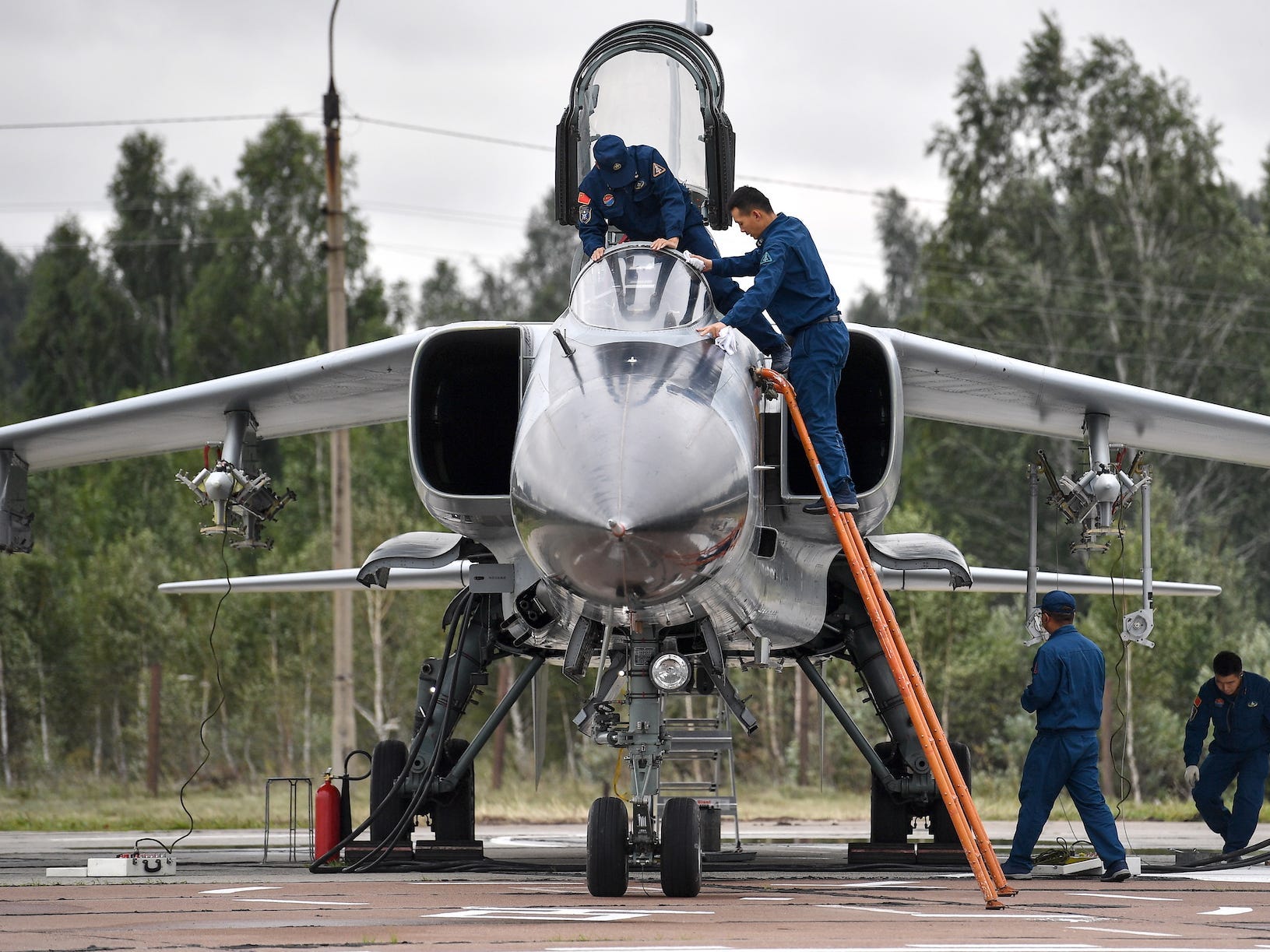 A Chinese FC-31 stealth fighter at the China Airshow-2014 in Zhuhai, China.

China's air force and navy now field roughly 2,800 aircraft, about 2,250 of them combat aircraft.
That gives China the largest aviation force in the region and the third largest in the world.
The build up of that force means China is “rapidly catching up to Western air forces,” the Pentagon says.

The Pentagon estimates that China has roughly 2,800 aircraft in those two forces, not including drones and trainer aircraft. About 2,250 of them are dedicated combat aircraft, including 1,800 fighters, about 800 of which are considered fourth-generation jets.

The PLAAF in particular has, in recent years, shifted from territorial air defense to “offensive and defensive operations,” building a force “capable of projecting airpower at a long range,” according to the report. 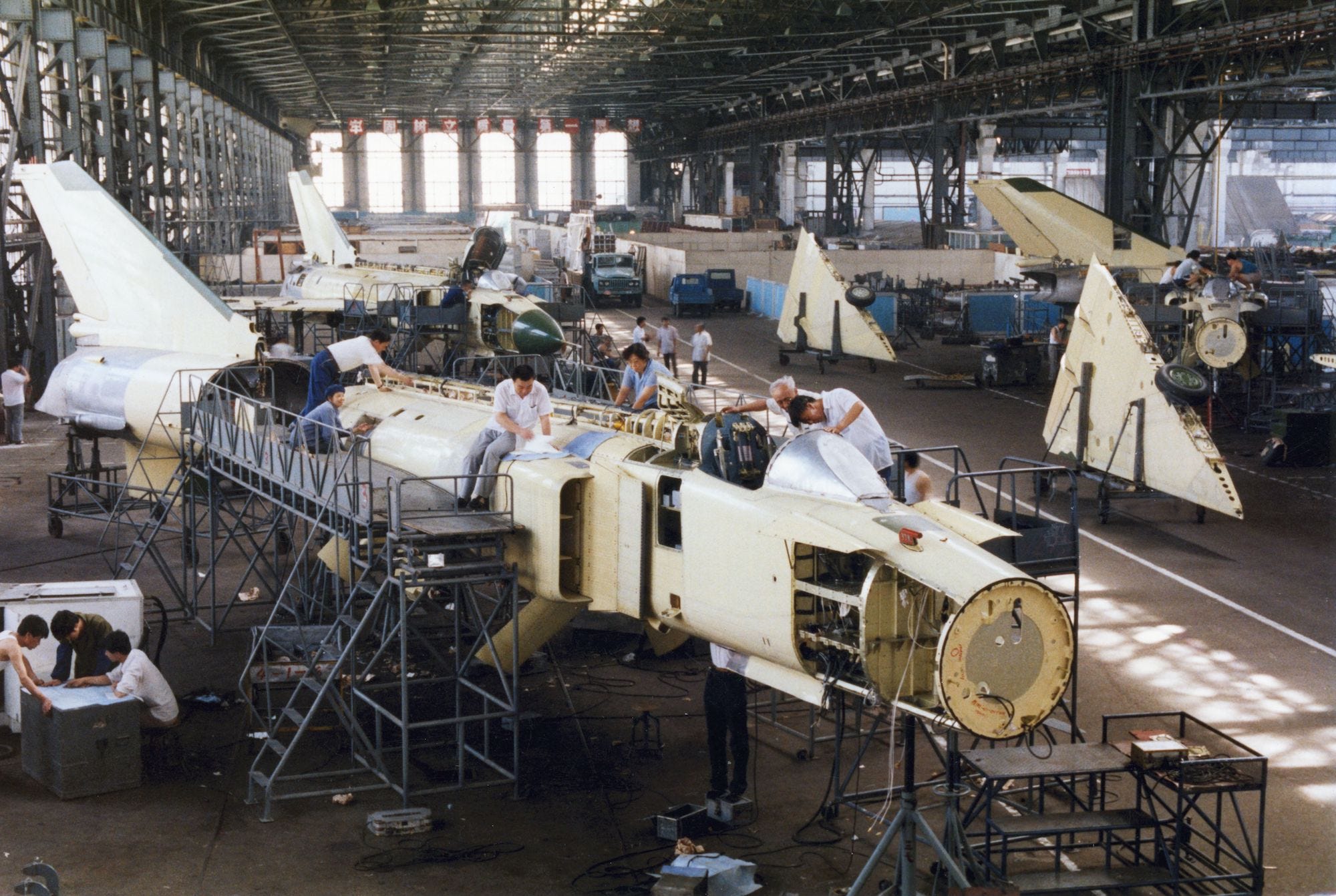 Chinese J-8II fighters being built at the Shenyang Aircraft Manufacturing Company in 1990.

During the Cold War, the PLAAF was reliant on Chinese-built copies of the Soviet aircraft.

In the 1980s, China's first indigenous fighter, the J-8, was essentially an elongated version of one of those copied aircraft. Its successor, the J-8II, had a new nose and upgrades but was largely outclassed by any potential rivals by the time it entered service.

In the early 1990s, China began purchasing fourth-generation fighters from Russia to boost its inventory and gain technical experience. China bought a number of Su-27, Su-30MKK, and Su-35 fighters from Russia between 1992 and 2015 and began making its own versions of those jets as soon as it got them.

The first such jet, the J-11, was a licensed copy of the Su-27. Intended to be a heavy air-superiority fighter, it retained many of the Su-27's characteristics and capabilities, including a 30 mm cannon, 10 hardpoints for missiles, a top speed of around Mach 2, and an operational ceiling of about 60,000 feet.

In 2004, China ended production of the J-11 and began producing a reverse-engineered version, the J-11B, against the terms of its coproduction agreement with Russia.

Some 297 J-11s in multiple variants are currently in service with both the PLAAF and PLAN Aviation.

While the J-11 is intended for air-superiority duties, the J-16 is a multirole fighter capable of conducting airstrikes. It has 12 hardpoints for missiles and bombs in addition to a 30 mm cannon, as well as an active electronically scanned array radar.

More than 150 J-16s in multiple variants are in service with the PLAAF, which in November began combat training of the J-16D, an electronic-warfare variant.

The most abundant model is the J-10, which may be based on the Israeli IAI Lavi. About 488 J-10 variants are believed to be in service with the PLAAF and PLAN Aviation. 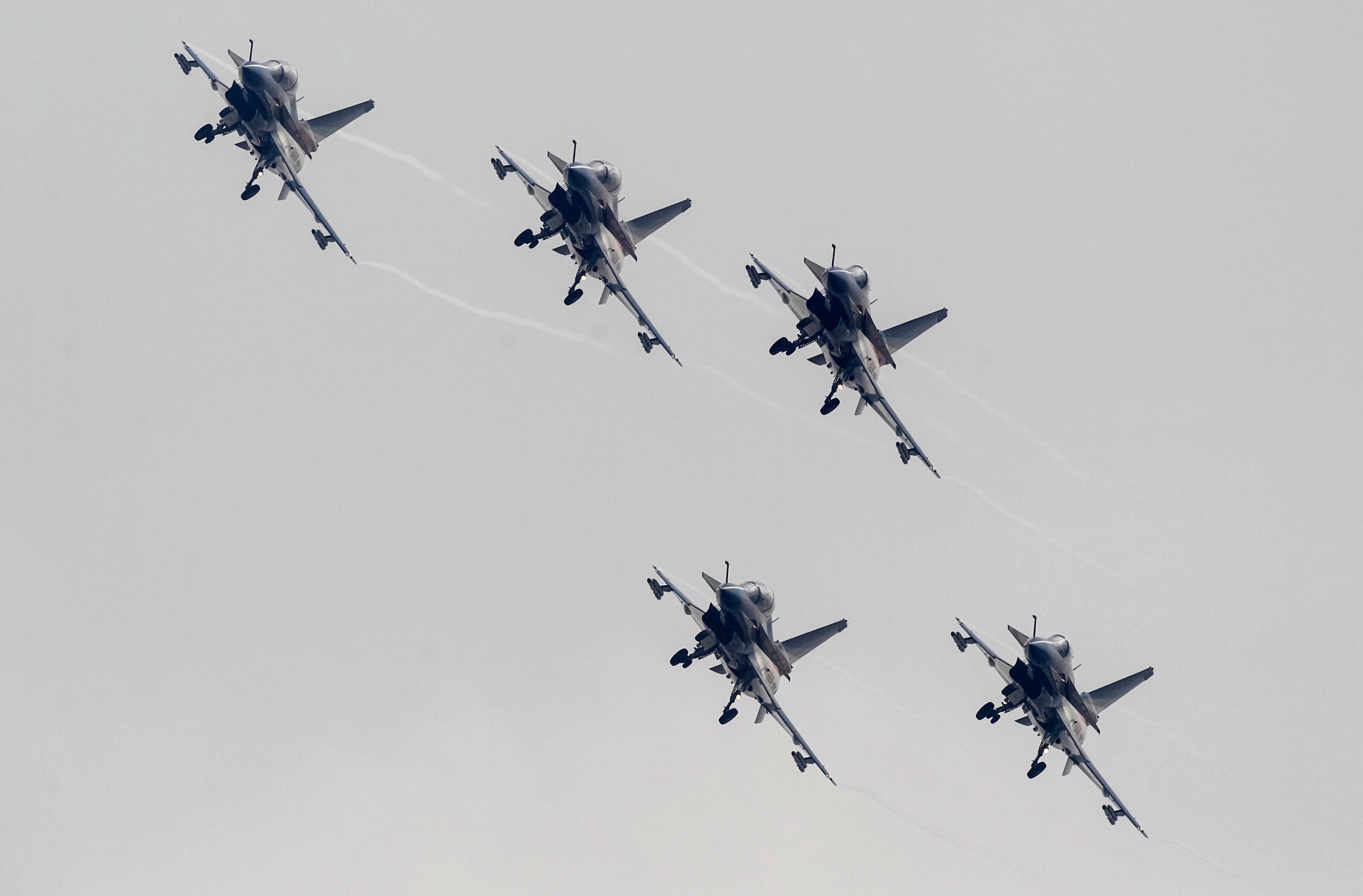 Introduced in 2005, the J-10 is a single-engine multirole fighter with a delta wing and canard design.

The J-10 has 11 hardpoints, an active electronically scanned array radar, and a 23 mm cannon. It is believed to be capable of speeds over Mach 2 and to have an operational ceiling of about 60,000 feet.

The PLAN Aviation force has its own carrier-based fighter known as the J-15 as well. China based the J-15's design on an unfinished prototype of an Su-33 carrier aircraft purchased from Ukraine, as Russia was unwilling to sell its Su-33 to China.

At least 34 J-15s are in service with the PLAN Aviation, and they are the only fixed-wing aircraft capable of operating on China's two carriers. They face a number of problems, however, including the fact that they are the heaviest carrier aircraft in service in the world. 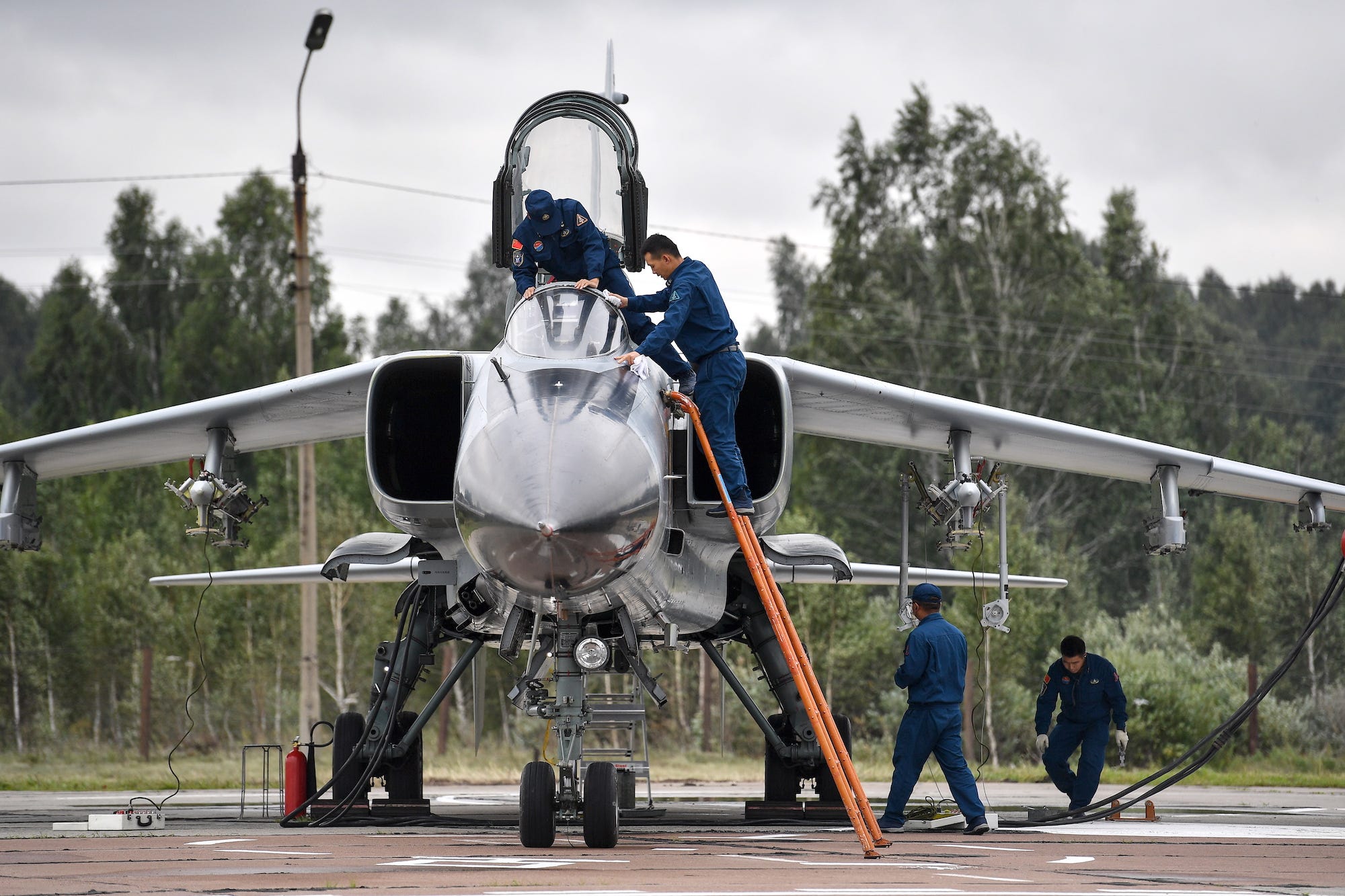 A Chinese JH-7A fighter-bomber during an international anti-terrorism exercise, August 27, 2018.

With the retirement of the Q-5 in 2017, China now operates just two dedicated bomber aircraft: the H-6 strategic bomber and JH-7 fighter-bomber.

A copy of the Soviet Tu-16, the H-6 is a twin-engine jet bomber capable of carrying about 20,000 pounds of ordnance. It is believed to be capable of speeds of about 650 mph and of reaching altitudes over 40,000 feet.

The H-6 bomber fleet is China's largest, with more than 230 in service with the PLAAF and PLAN, and is made up of a number of variants.

The H-6K has upgraded engines and can carry six standoff land-attack cruise missiles, threatening enemy targets as far as the Second Island Chain, which includes the US territory of Guam. 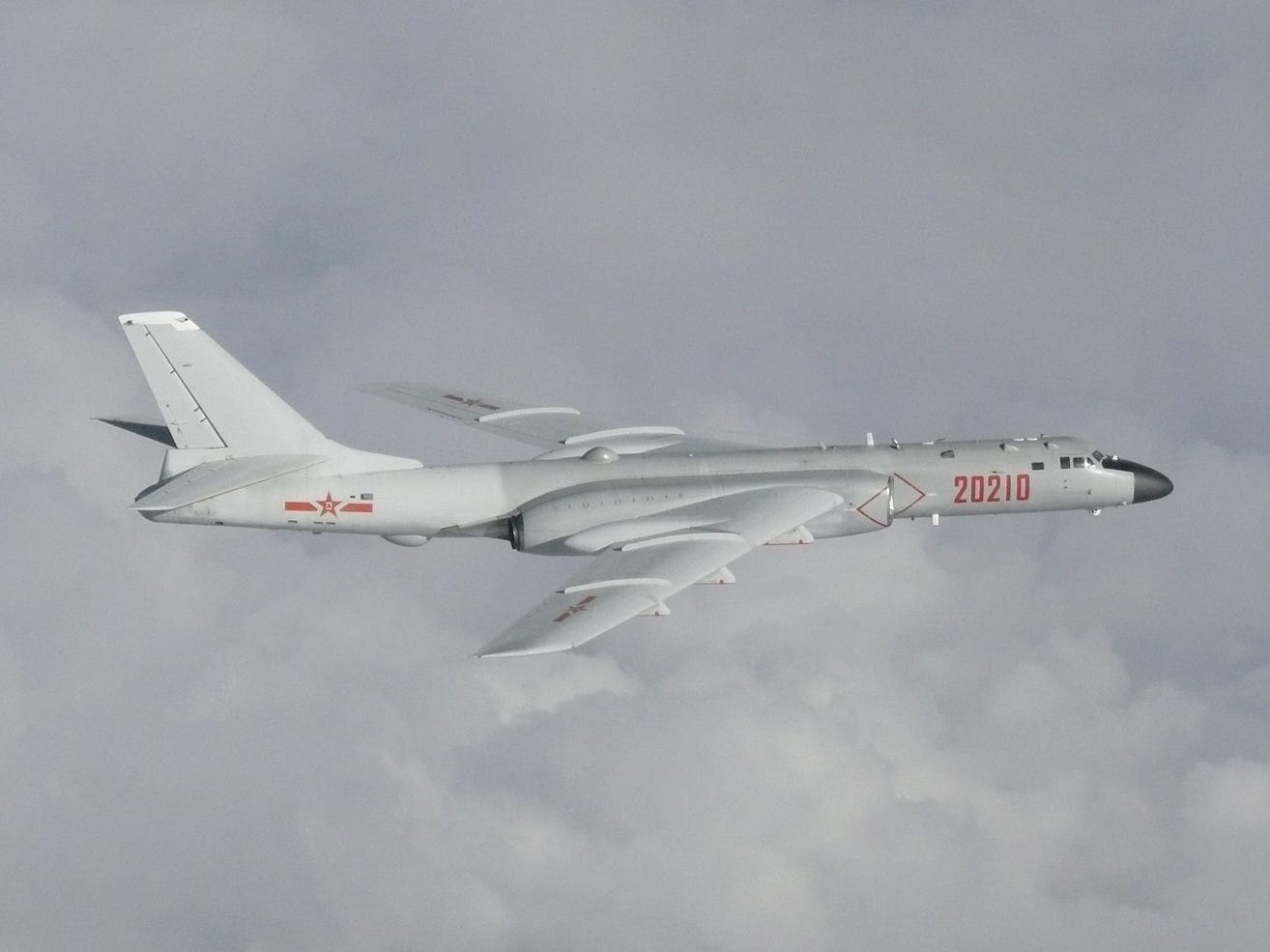 A Chinese H-6 bomber over the East China Sea.

The H-6G and H-6J are naval variants, with the H-6J capable of carrying six anti-ship cruise missiles like the YJ-12, posing a threat to aircraft carriers.

The H-6N, publicly displayed for the first time in 2019, is particularly worrying. Its fuselage is modified to carry an air-launched ballistic missile, which is likely capable of carrying a nuclear warhead. It is also China's first nuclear-capable bomber that can conduct midair refueling.

In October 2020, an H-6N was spotted carrying what is believed to be a hypersonic missile. With this capability, China has “possibly already established a nascent 'nuclear triad,'” according to the Pentagon.

The JH-7 is intended for shorter-range bombing operations. Introduced in 1992, it is armed with a 23 mm cannon and can carry over 7 tons of bombs on nine hardpoints. It has a ceiling of about 50,00 feet and a top speed of about Mach 1.

The JH-7 can carry land-attack and anti-ship ordnance. About 260 are in service with the PLAAF and PLAN Aviation. 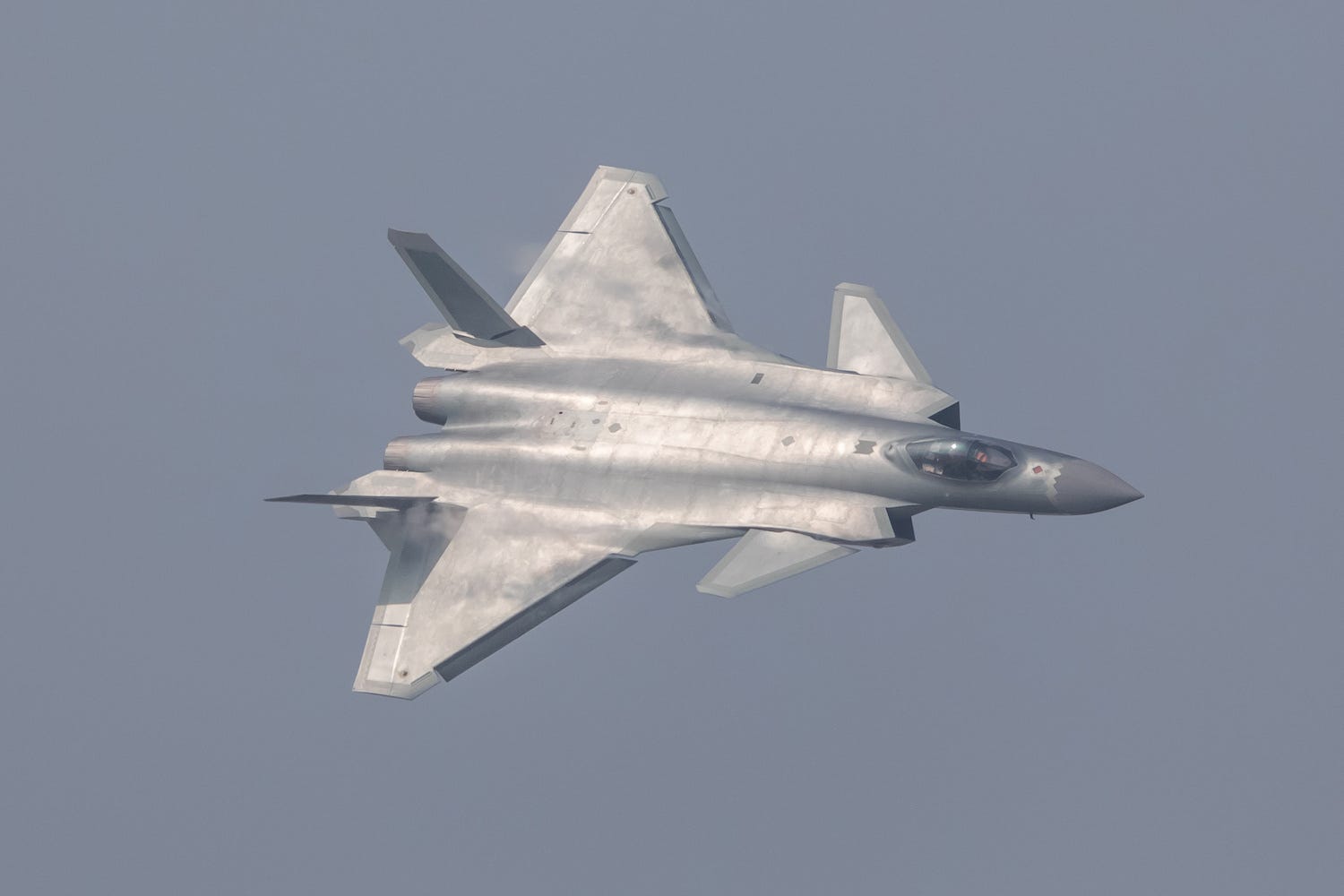 The PLAAF's proudest accomplishment has been its fifth-generation stealth fighter — the J-20 “Mighty Dragon.”

The J-20 is likely based on plans stolen from the US stealth program. Its exact specifications are not publicly known, but it is believed to be capable of a maximum speed close to Mach 2 with a ceiling of about 60,000 feet and a range of almost 700 miles.

China has more stealth aircraft in development — including a nuclear-capable stealth bomber (likely named the H-20) that will have a range of 5,000 miles and be able to carry a payload of 10 tons. 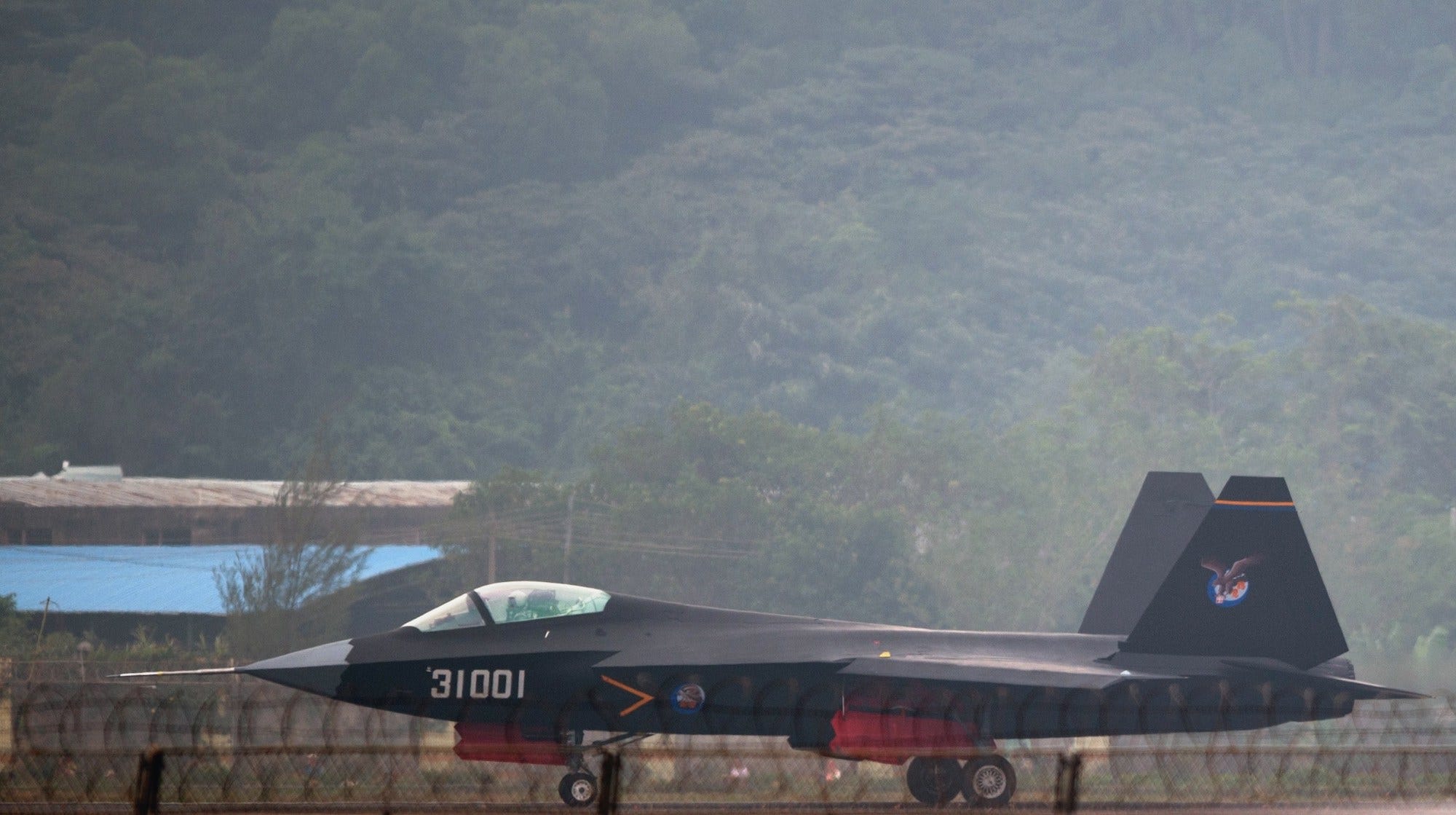 China is also developing another stealth fighter, the FC-31, which is likely to be its next carrier-based fighter, replacing the J-15. Images released in October appeared to show an FC-31 variant flying with a catapult launch bar on the nose landing gear as well as wing-folding mechanisms.

China is developing other technologies and skill sets that will allow it to get more out of its aircraft. It is making progress on the engine problems that have plagued its jets and developing a more advanced air-to-air missile arsenal.

It has also displayed improved aerial-refueling capabilities, which the Pentagon says will allow its jets to operate farther and for longer.

“The PLAAF is rapidly catching up to Western air forces,” the Pentagon said in its report, adding that China's aggressive modernization and acquisition of advanced systems are “gradually eroding” the US military's “longstanding and significant” advantages in the air domain.

Source: China now has the world’s 3rd-largest aviation force. Here are the combat jets it’s using to catch up with the West.